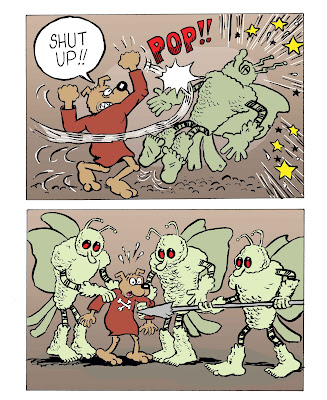 Here I am again, shamelessly promoting my new book, PRISONER of the MOTH-MEN.  This book is the longest full color work I have ever created with over 80 pages.

The two panel per page format is designed to look good on the Amazon Kindle and I just downloaded my copy on my Kindle Fire. If it didn't look good, I wouldn't be writing this recommendation.

Don't have a Kindle?  No problem, you can download a free Kindle application for your PC or your iPhone or iPad.

I am excited to see if people like this book.

There have been very scarce postings on this website of late. Please don't think that means that I have not been writing and drawing.  I am about two weeks away from releasing an 80 plus page book in full color on the Amazon Kindle.  Here is a look at the cover... 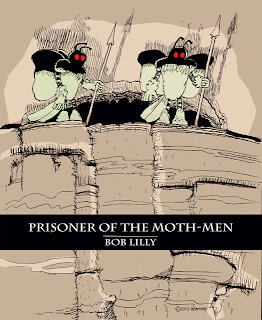 If you don't own a Kindle, please download the Kindle application for whatever device you prefer. PRISONER of the MOTH-MEN is designed to look good on the Apple Iphone, I-Pad, Kindle for PC, Kindle Fire.  I have even seen this on the black and white Kindle DX and it lookes great on all of these devices.  Needless to say, I am most excited about this book.
Which of my comics would you prefer to see a new collection in ebook form?  The "Snipe" or Don't Tell Grandma?
See ya soon!﻿
Posted by Bob Lilly at 8:32 PM 4 comments: 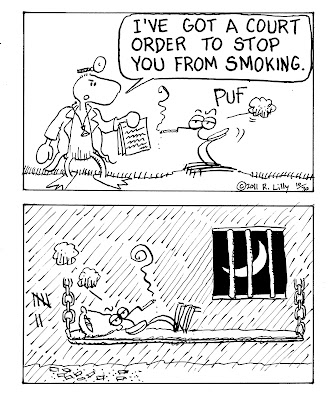 Here's what I think.   I looked at a website where the performance of mutual funds, stocks, and bonds are tracked and have concluded that everybody that is investing money is losing money. That is for the last five years or so.
Rich people, the super-rich are keeping their money in their mattresses. Why should they invest their money in anything?  Hence the economy is spiraling down.
On a happier note, Happy birthday to my best half, Becky.
Happy birthday to Steve Ditko.  If you don't know who he is, google him.
NOTE:
Not that I am a snob, but please don't add me to your Facebook yearbook.  This thing takes me to a page where I agree to let them have rights to my stuff.  I want to be in your yearbook. I really do. I want to retain my rights.  I really do love each and every person that I have known for a long time and will still speak to me.
See ya soon!﻿
Posted by Bob Lilly at 5:10 PM No comments: 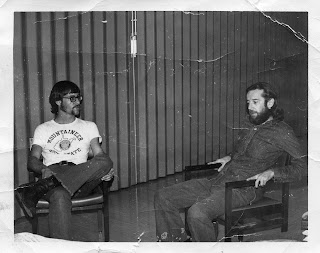 It's called Bob Lilly's Comics and Stories. This is one of the storie and it occurred in the fall of 1971 almost forty years ago on the mark.  I was on the student newspaper at Concord College in southern West Virginia and it was homecoming week.  I knew the George Carlin was going to perform at our school on a Tuesday night and coincidently at the exact time he was supposed to guest star on the Flip Wilson TV show.  I wasn't sophisticated to know that the TV show had been tape recorder a couple of weeks earlier.

The student body president, Nick (I don't remember his last name) was going to greet Carlin as he parked his car and he made good on his promise to me to ask George if I could interview him for the Concordian.

A room had been set aside for Carlin and in that room was John Valleau, Photographer Joe (Oxley, I think), and me with a borrowed cassette tape recorder.  George was cool with all that we asked of him.

The whole group asked him questions for about fifteen minutes before the floor began to shake with BOOM BOOM BOOM.  George jumped up and said it was the audience and they were ready for the show.

We were outside the auditorium and George asked us if we could get him a glass of water.  Someone found a largish, reaatively clean looking paper cup on top of something and George said that would do. He rinsed it in the drinking fountain and filled it up.

As George entered the stage door, the rest of us squeezed our way into the audience.  George began with walking around in front and making incredibly funny goofy faces at the croud and had us laughing without saying a word.  He did pretty much all of the material you can still hear on his records from 1972.

At the halfway point, George asked, " Did you ever notice that a swallow has two parts?" He put the microphone to his throat and picked up the questionable paper cup of water and let us hear what a swallow of water sounds like.

After George performed for an hour or so, he left and so did I. For another forty five minutes I interviewed him while a rock group was performing. I really don't remember which group it was.

Esquire magazine has just published an exerpt of Albert Goldman's book about Lennie Bruce. George told me that he had not only read the entire yet to be published book, but that he had talked to Lennie's Mother and widow about the book.

He told me that he really didn't know for sure what he was going to do before he started a performance but he would have a couple of prepared bits to fall back on when he began to draw a blank. That is what the drink of water was.

He described his bits as a box of paints that he would recombine to make an entirely new painting each show.

George told me that he used to hitchhike a lot in his younger days and he still remembered some amusing town names in West Virginia. Fry, and Man and Pie (which is a piece down the road).

I don't seem to have a copy of the Concordian which ran my interview with George Carlin. He wrote down his home address in Vienna California (with a ball point pen that wrote in purple ink) and asked me to mail him a copy of the paper. Maybe I sent him my copy.

I stilll have only the photo which was taken and developed by Joe (the back of the print has "photo by JWO" written on it.  I remember he was from New Jersey byt I am not 100% that his name was Oxley.

I am wer=aring a pair of Harness boots that I bought for around twenty bucks and a Mountaineer Boys State shirt.  Boys State was an annual week long camp that had one boy from every high school in West Virginia. It was considered an honor, by some, to go there.

George Carlin is wearing blue denim with embroidery on the bell bottoms.  This was the frist time I ever saw him with a beard and never again did I see him without one.

I am sure he would not have performed at a small college in West Virginia unless he needed the money. In his book "FINAL WORDS", I read that he was having a career setback at that time because he grew his hair and beard, etc. Plus drugs and different comedy material than before.  This evolution from Al Sleet, the hippy dippy weather man into George Carlin, observational humorist probably enabled his career to continue for a long time.

I treasure the memory of this encounter with George Carlin forty years ago.
Posted by Bob Lilly at 3:36 PM No comments: 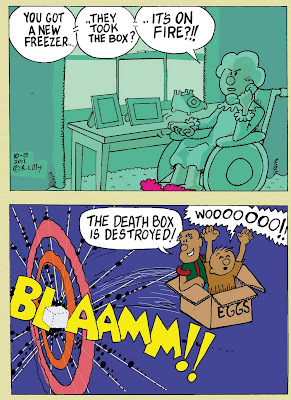 Okay, so it has been a few since I last posted.  Here is another scene from DTG: Cardboard Wars for your enjoyment.
Happy Birthday to Alexandra.
There are TV shows that you really don't want to publicly admit to watching.  Some because they are stupid. Some because they are vulgar. And my favorite, stupid AND vulgar.
I have always thought that TWO and a HALF MEN was a pretty good show.  I don't want you to know that I watch it but it was always witty and well done.  Maybe you have heard that they changed the casting recently. They should have ended the show.
I remember that Ashton Kutcher played a dunce on THAT 70s SHOW.  He is pretty much playing his new character on TWO and a HALF MEN as a dunce.  Jake was the dunce character.  Now Jake just walks through one scene per show because there isn't enough contrast between characters for the new dynamic to work.
The show just doesn't work.  Charlie should have been replaced with another guy exactly like Charlie.
When Curly died, Moe and Larry didn't bring in another bullying bossy character. They brought in another zany guy and made it work with Shemp.
I wonder how the show will do in the ratings this year.
See Ya soon.﻿
Posted by Bob Lilly at 4:44 PM No comments: 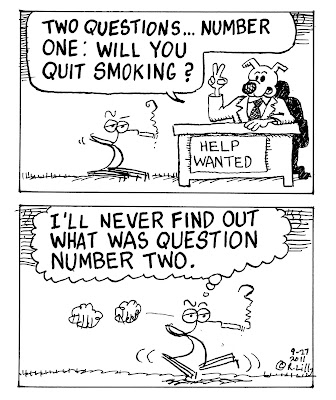 This actually happened to me a long time ago. Question number one was either, "Will you shave off that beard?" or maybe "Will you get a haircut?"
That was back in 1973 and I still don't know what was question number two.  I have worn short hair and have been beardless nearly my entire life.  Oh well... The "Snipe" is not usually autobiographical.
See ya soon!
﻿
Posted by Bob Lilly at 1:53 PM No comments: 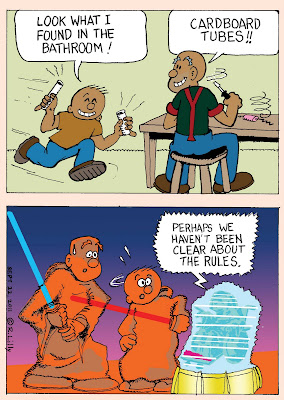 Today is the second installment of Don't Tell Grandma: Cardboard Wars. Whaddya think?
This one is dedicated to Mom, who would have been 83 years old today.﻿
Posted by Bob Lilly at 8:33 AM No comments:

Highly Recommended by Me